The new campaign launched through many signage display on Sept. 1 and will run for three weeks. It will alert victims how to reach out for help through the National Human Trafficking Resource Center (1-888-373-7888), as well as raise awareness about the true nature of modern slavery, the release said.

A collaborative effort between Polaris and CCOA, the out-of-home media campaign, which is estimated to deliver approximately 6.5 million impressions of digital signage, is designed to reach trafficking victims who may be unaware that resources exist to help them and residents who can help identify suspicious activity with raised awareness that human trafficking is a major problem in Minnesota and throughout the U.S. 365 days a year, according to the release. CCOA is donating ad space across its digital OOH media platform in the Minneapolis-St. Paul metropolitan area for the campaign. 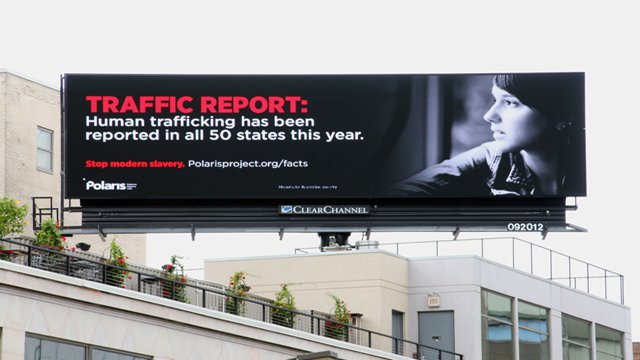 “People exploited in forms of modern slavery are receiving help and services to rebuild their lives every day in America, including here in Minnesota. From the domestic worker provided with her visa, to the young girl sold online for sex who now has counseling and therapy support, survivors are reaching out to the national human trafficking hotline more than ever,” said Caroline Diemar, Polaris’ national hotline director. “Too often, though, survivors aren’t aware the national hotline exists or that they can be connected to a network of support across the country. Minnesota’s awareness campaign is critical to ensuring survivors of sex and labor trafficking get the help they need.”

Polaris and CCOA have formed a national partnership to combat human trafficking with campaigns in cities across America. CCOA launched its first anti-human trafficking campaign alongside Polaris in Philadelphia in 2012 and has since supported campaigns with Polaris and/or local partners in Baltimore, Iowa, Las Vegas, Los Angeles, Miami, Milwaukee, New Jersey, New York, Phoenix, San Francisco, Seattle, and across the entire state of Texas, the release said. This is CCOA’s 20th anti-human trafficking campaign, and data show that the campaigns drive calls to the hotline, including tips and requests by victims for help.

“Our digital OOH campaign has the power to reach many victims of human trafficking across Minnesota and let them know that there is help and way out of this modern slavery,” said Susan Adams Loyd, president of CCOA-Minneapolis/St. Paul. “What is also important about this campaign is that we are reiterating to residents that human trafficking is a real, crucial issue that needs a call to action immediately. Together with Polaris, and with the support of Congressman Paulsen and Minnesota law enforcement, our goal is help these victims gain back their freedom and ultimately decrease the number of cases of this heart-breaking crime.”