Chez Ma Tante, Where Falafel and Kedgeree Live in Harmony

All the things I love about the pancakes at Chez Ma Tante, near the Greenpoint waterfront in Brooklyn, are things that normal chefs would try to fix. They are a little too tall and too big around. The outside is nearly black in parts, and crunchy, which American pancakes almost never are.

What they most closely resemble are the pancakes I’ve made on camping trips, from a mix, with about a quarter-stick of melted butter in a smoking-hot pan over a fire. Each one is the size of Frisbee because too many people are waiting for breakfast for any space in the pan to be wasted.

Assuming my campfire pancakes were to catch a chef’s eye, the standard way of turning them into a brunch dish would be to refine them. The heat would come down so they’d cook to an even golden-brown. My quantity of butter would seem insane in a professional kitchen, so it would be cut. The batter would probably be thinned to make the pancakes shorter and more elegantly rounded.

Rounding out the rough edges is, in a broad sense, one of the main things chefs do. They may not always do it consciously, any more than a copy editor consciously corrects typos. It’s supposed to become a reflex, which is the point of the sign on the kitchen wall at Eleven Madison Park: MAKE IT NICE. 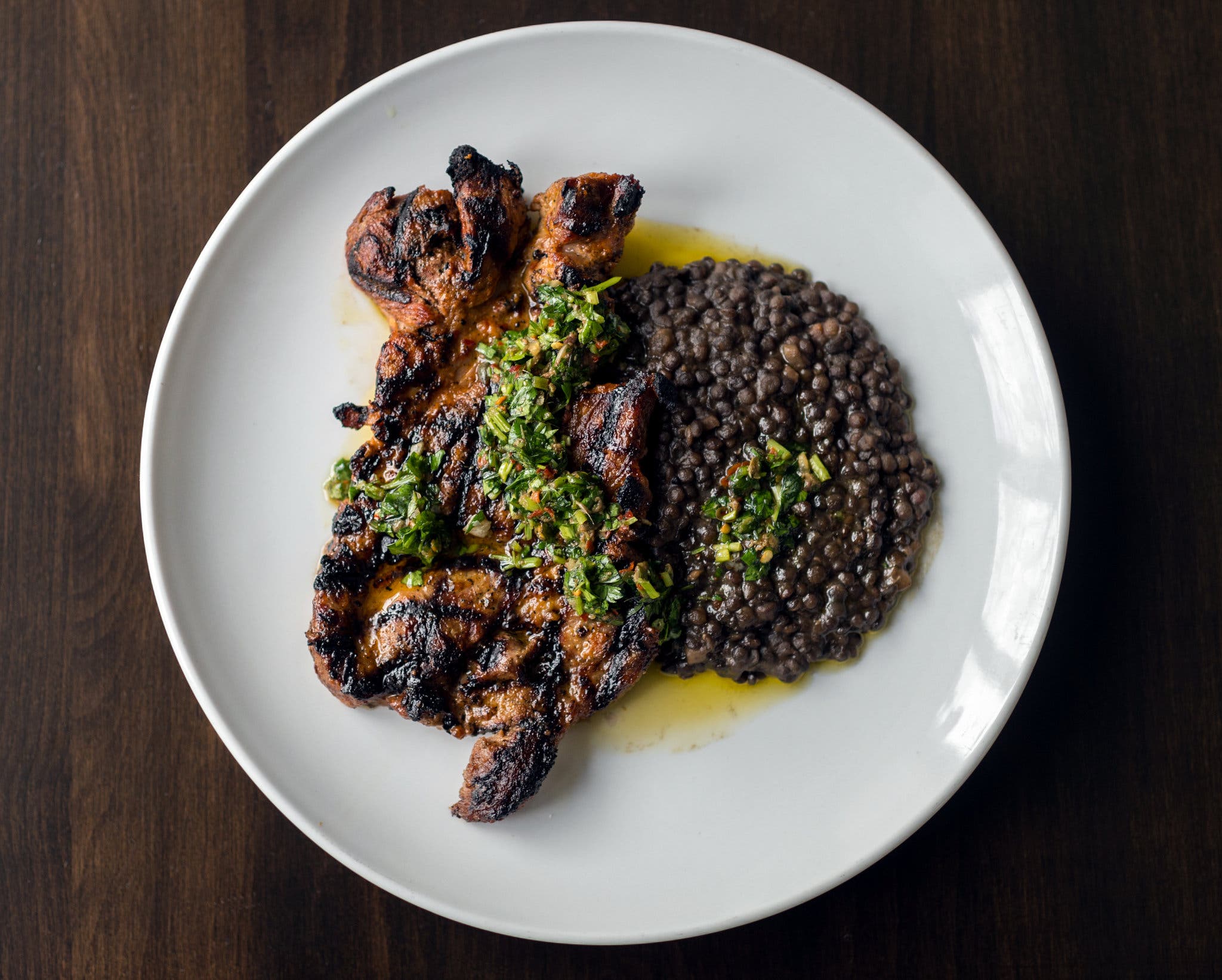 This is just what the chef Aidan O’Neal at Chez Ma Tante does not do to the pancakes. Rising up from a small flood of maple syrup, they look and taste as if they’d been made in the woods. I will gladly admit they’re better than mine. At weekend brunch, they are on virtually every table.

Mr. O’Neal and his chef de cuisine, Jake Leiber, do not lack skill in the kitchen, but they know when to resist cheflike impulses and think like hungry campers. Their healthy disregard for refinement spills over to the dinner leather menu covers, which recently expanded to seven nights a week from five, just as the restaurant is approaching its first birthday.

To start, you might smear a gob of chicken liver pâté on a tangy slice of miche charred over the grill, or some head cheese, a spreadable pink composite of meat not quite held together by drippy pork goo. The most rustic thing you can eat there at night, though, has to be the thick steak carved out of a pork shoulder, rubbed with mustard and maple syrup, and striped with wide, dark grill marks.

Smeared over the top is a salsa verde made from fresh parsley and other herbs that were whole about three or four slashes of a knife ago. Stewed Puy lentils spill across the rest of the plate. The look may say it was thrown together, but the full, lasting flavors tell you it wasn’t.

It is hard to say exactly what kind of food Chez Ma Tante serves, apart from the consistently good kind. The website calls it “food that can only be described as European.” This isn’t particularly helpful or specific; I’ve never eaten anything there that seemed Finnish, say, or Bulgarian.

If the menu covers have a theme, you won’t guess it from the dining room. A collection of brown chairs and black tables on a black floor in an undecorated white room, it is as austere as a Shaker chapel, although one with a long, well-populated bar against the wall.

No hints are forthcoming from the cocktail list, either, which plays it close to the vest with daiquiris, Negronis, Cosmopolitans and so on. It is the first cocktail list I’ve seen in a long time on which I recognized every drink.

Other writers have described Chez Ma Tante as a neighborhood spot, a homage to certain well-known London restaurants, a gastro pub and a “French-Canadian bistro.”

This last must be a reference to Mr. O’Neal. Raised in Vancouver, British Columbia, he cooked at Au Pied de Cochon in Montreal under Martin Picard, the grinning scoutmaster of the hungry-camper troop, before moving to New York to work at the berserk Québécois outpost M. Wells, in Long Island City, Queens. (He met Mr. Leiber a few years later when they worked together at Café Altro Paradiso in SoHo.)

The name Chez Ma Tante was borrowed from a stainless-steel slot of a place in Montreal known for its steamé, a steamed hot dog in a steamed bun. An “all dressed” steamé, meaning it’s loaded up with mustard and coleslaw, is a new feature on the brunch menu in Greenpoint.

Apart from that and a recurring maple motif — the jugs of syrup on a shelf outside the kitchen are not just for show — the Québécois influence is minimal.